3D – A Series of Small Works 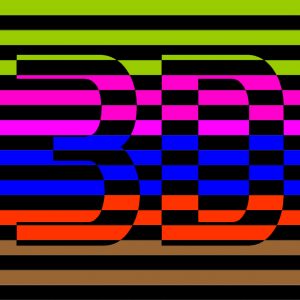 “As my major painting projects seem to be getting larger and larger, it was a conscious decision to create some smaller more affordable works in parallel. I also don’t usually have a theme or “back story” to my abstract works, preferring to let people make up their own minds about them, so this was also the challenge I set myself.”

3D, is a series of small paintings inspired by 5 historical pigments that were either outrageously expensive, incredibly difficult to make or just downright deadly!

All 5 Paintings were SOLD on the first day of release.

Background to the Paintings

It all seems so easy these days. Drop into the art shop and pick up the precise colour you want or just shop online and get a tube delivered straight to your house. But it wasn’t always this way. Artists used to work hard to get the exact colour they desired.

Naturally occurring pigments like Ochre and Charcoal have of course been used since people first started making marks on stone and skin.

Then came the grinding of Bugs, Twigs, Shells & Minerals into new concoctions,  combining materials and developing many different techniques. The results have often been extraordinary.

Some colours became fashionable sensations, the new “must have” shade or tone.

Some were so complicated or laborious to produce they became exorbitantly expensive.

Others were just downright deadly. The elements used or the process required to create the finished colour, produced a killer product.

The Small Paintings in this collection explore 5 different pigments and the fascinating story behind them.

A sensation when it was first produced around 1775, Scheele’s Green quickly became “the colour” to use in clothing, furnishings, carpets, wall-paper, toys and even as a food dye. The striking Emerald Green paint retained it’s popularity for over 100 years but unfortunately there was one major flaw in it’s composition.

It contained dangerous amounts of arsenic!

Scheele had actually known this right from the start and had pondered warning users about the dangers, but didn’t. Over the years many died from exposure to it, especially young children, the infirm and people exposed to high concentrations. A fashionable London dinner party in 1860 featuring a spectacular green blancmange, killed off three of the guests.

The most famous victim of the pigment is thought to be Emperor Napoleon Bonaparte who died in exile in 1821 on the island of Saint Helena. Wanting a reminder of his glorious past he had requested his bedroom be decorated in his favourite colour. After his death a scientific study of a lock of his hair showed traces of Arsenic and it was long thought he could perhaps have been assassinated.  Years later a small sample of the actual bedroom wallpaper was discovered and tested. It was the infamous Scheele’s Green. 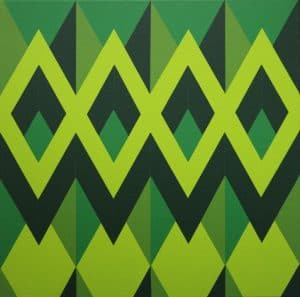 Green is one of my favourite colours, though I’m not really big on the Emerald or Lincoln shades, preferring Limes and Olives. This painting is an abstraction based on an actual Victorian wall paper design. The name of the painting also refers to the nickname given to pentobarbitone the powerful drug used to euthanase animals by vets.

When the Conquistadors arrived in the Americas in the 1500’s they not only discovered the ancient civilisations of the Maya, Incas and the Aztecs, they also found the ancient dye Cochineal that had been used extensively since the second century.

If you can find a prickly pear cactus bush that’s looking a bit worse for wear, chances are you can create one of the oldest natural colours in the world. The pigment is created by collecting, drying and then grinding the tiny bug that infests the bush.

So popular did the pigment become in Europe that it soon became Mexico’s second most valued export after silver and it was traded on the London & Amsterdam Commodity Exchange.

In fact it was so lucrative to grow that in central Mexico by the 1550’s, most farmers had abandoned growing maize and other food crops, and concentrated on producing Cochineal on Prickly Pear, that they actually had a food crisis and restrictions were placed on how many plants could be grown by any one farm.

The industry was virtually wiped out when new synthetic colours were developed, however it still is being produced and used in Cosmetics and Food.

Next time you’re knocking back a red sports drink, iced vovo, a bright ice block or applying a bright red lipstick you can think of this. 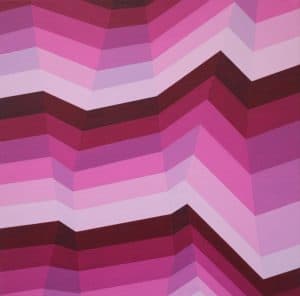 This Painting is based on my childhood memories of the shades of colour Cochineal produced. My mum had a small bottle in the pantry, it probably lasted for years. It can produce a range of Reds and Pinks, especially on Coconut Ice. I used memories of those layers of colour as the basis of the painting.

While this vivid deep blue pigment had been used in Asia and the Middle East for many years, it only came to Europe in the 13th Century. Arriving “from beyond the sea” or Ultrmarinus in Latin, gave it the name we know it by now.

It was an incredibly desirable pigment and it was incredibly expensive, exceeding the price of gold. Because of the cost and rarity it was for many years only used for sacred subjects, a tradition still seen to this day.

The process to create it was long and complicated. Rocks of the mineral Lapis Lazuli were mined in the mountains of what we now call Afganistan. It was, shipped out, crushed, combined with resins, soaked in alkali, kneaded for 3 days and nights, then soaked again. The liquids were then laboriously squeezed out and allowed to evaporate in the sun, leaving behind a tiny amount of the precious blue powder.

By the early 1800’s, with the English controlling the trade routes out of India and the ever increasing price of the pigment, the French Government offered a huge cash prize to anyone who could develop a synthetic version. With this incentive, an alternative was soon found and was being sold at a tenth of the price by 1828. 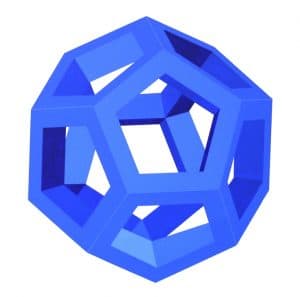 This painting is based on the crystalline structure of Lazurite, the main component of Lapis Lazuli, a 12 faced Regular Dodecahedron.

The Romans loved the bright orangey red that the mineral Cinnabar produced. They daubed it on victorious Gladiators and used it to make their paintings pop.

It was sometimes known as “Dragons Blood” reflecting it’s volcanic origins, though this name is now more widely used as the resin produced by the Dragon’s Blood Tree Dracaena cinnabari, also used as a medicine and dye.

Cinnabar is only found in volcanic areas and the Romans found a great supply in the famous Almaden mines of Spain. It’s also the ore used to extract Mercury and the process was difficult, expensive and dangerous. The deadly fumes are estimated to have caused hundreds of thousands of deaths over its centuries of extraction. The miners, often slaves or prisoners,  often only lasted a year or two before going mad or dying an agonising death.

Cinnibar is also found in central China and by the 8th Century they had discovered a way to create a more intense synthetic version. It still used mercury but the new pigment became popular on decorative pieces and lacquer ware.

The Europeans refined the process further and Vermillion as we know it now, was adored by painters from the Renaissance onwards, including JMW Turner who often used it to create warmth in his works. Because of the cost and toxicity of Vermillion, it was widely replaced by Cadmium Red when it was developed in the 20th Century. 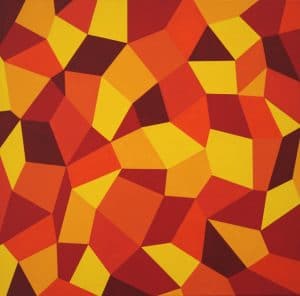 This Painting is based loosely on the Trigonal crystal structure of Cinnabar and the colour palette picked also reflects the Sulphur associated in it’s creation.

Mummy Brown or Egyptian Brown was first used as a paint from sometime in the 1600’s, becoming very popular in the 1800’s especially with the Pre-Raphaelites who liked it for shading and flesh tones.  It was still being used right up until the mid 1920’s. It’s sort of a shade between Burnt Umber and Raw Umber.

But no, it wasn’t a colour used for painting Egyptian Mummy’s, it was actually made by grinding up the decaying flesh and bones of the Mummy’s!

The deep thick substance had actually first been used as a medicine, as were many of the early pigments. Once it’s popularity grew, plundering tombs and shipping them back to Europe became a brisk business. There are many stories that as the supply of real Egyptian Mummies started drying up, bodies of condemned criminals and slaves were substituted into the mix. These were coated in bitumen and left in the sun to bake for a few weeks producing a similar substitute.

Finally, the lack of readily available source material and more likely the growing realisation of what the paint actually was, led to it’s rapid decline. It certainly is one of the more intriguing stories in the world of paint. 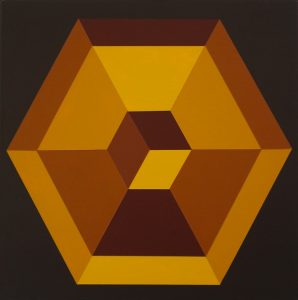 On close examination, the hexagonal painting can be seen to be based on a triangular structure, however it often seems to switch into a cube like form. And like the great Pyramids of Egypt, it then reveals a hidden chamber within.

The Paintings are 30 x 30 cm. Acrylic on Canvas.
They come with hanging hooks and wire in place.
The wooden stretcher is 4cm thick, meaning the small painting can also stand upright by itself, perfect for a sideboard or shelf.

Note – We have deliberately priced these to be as affordable as possible to people who may never be able to afford one of the larger paintings but still want a Lynda Hyde original painting!

They are all signed and come with a Certificate of Authenticity.

Contact us ASAP to secure one of the remaining paintings in the series.